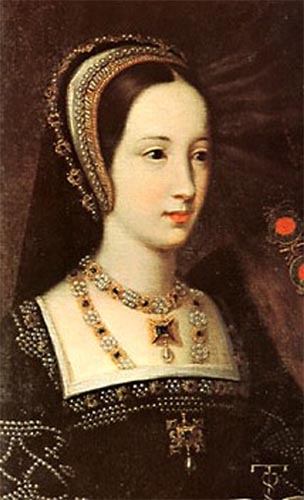 In 1514, Cardinal Wolsey negotiated a peace treaty with France which was strengthened by the marriage of Princess Mary, the sister of Henry VIII to Louis XII of France.  Louis was 30 years her senior.  There was a proxy wedding at Greenwich Palace in August 1514 when Louis XII was represented by a French nobleman and the marriage was ‘consumated’ by touching of the bare legs of Princess Mary and the nobleman.

King Henry and Princess Mary then travelled to Dover, staying overnight at Otford Palace later that month.  Bad weather in the English Channel delayed their passage for four days and one of the ships carrying some of the attendant wedding party was wrecked with loss of life.  The ship carrying Princess Mary ran aground and the Princess had to be rowed to shore. The Princess and her king were later married in person in Abbeville in France on 9 October 1514. (Weir, 2012)

Alas, the marriage was short lived: Louis XII (reputedly worn out by his exertions in the bedchamber, but more likely from the effects of gout) died on 1 January 1515 84 days later!

Since it seems unlikely that Henry VIII would tolerate staying in a building site, it would seem that Otford Palace was completed by August 1514 well before the rebuilding work started at Hampton Court in 1515.