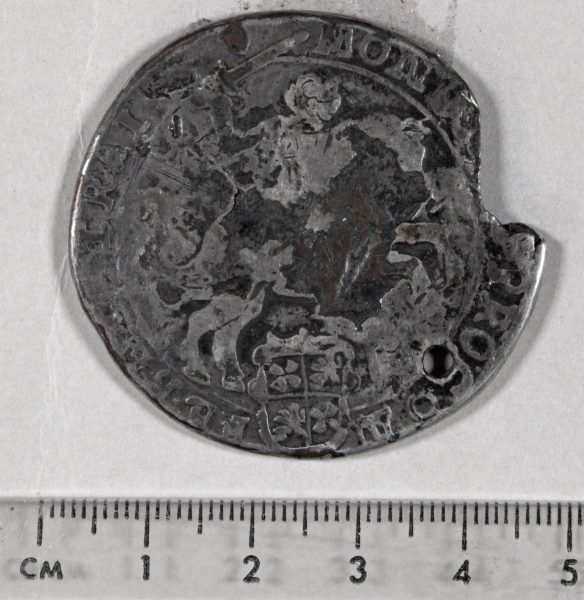 Silver laminated copper coin. This is a forgery of a silver Rixdaalder (‘Rix dollar’).
A silver/copper coin (42x44mm) dated 1671, found in a garden in Pilgrims Way East, Otford in November 2000. This is a false (ie, a contemporary forgery for circulation) of a silver Rixdaalder (“Rixdollar”) of the United Provinces (Netherlands) writes David Sealy.

As these coins circulated widely abroad, especially in the Far East the forgery is quite likely made in, say, China or the East Indies. It appears to be a “Sheffield Plate” forgery, made by rolling a sheet of copper sandwiched between two thin layers of silver, cutting out the banks and then silvering the edges before striking. The dies seem to be quite good, the error E for OE does not necessarily mean they were fake.
On exposure of the copper core through wear, the coin has been cut to expose its falsity, and bored perhaps to invalidate it – the hole was probably not in the first instance for suspension. But it still would have made an effective pendant at a later date, and could have been lost at any time in the past three centuries – hence we find it in a garden in Otford.
The interesting things about these forgeries is that “Sheffield Plate” was only introduced as a respectable technical innovation fit for tableware, etc., in the first part of the 18th century. If the date on the coin is anything like the real date of manufacture, this antedates its introduction to Europe. But there are some well-known contemporary forgeries of English crowns and half-crowns of William III (dated 1696-7) made in this manner, struck using extremely convincing, but false, dies made from official puncheons stolen from the Mint. This was at the time when Isaac Newton was Master of the Mint, but the theft was not discovered until later.

Obverse: Crowned arms of the United Netherlands, supported by two lions. The shield (arms of the House of Orange) is recognisable as the present arms of the Kingdom of the Netherlands. CORCORDIA RES PARVAE CRESCUNT 16.71 (by concord, little things grow). Reverse: An armed horseman galloping to right, brandishing a sword; below, shield (in this case) of Utrecht. MO: NO: ARG: PRO: CONFOEBELG: COM: TRAI.
New silver money for the Confederation of the United Netherlands.
TRAI(ectum) = Utrecht (in this case OE is rendered by E)
At this time, the coinage of the Unived Netherlands was uniform in design, except that each province (in this case Utrecht) put its own name in Latin (TRAI) and arms on the reverse. It wold, if genuine, had an edge insctription too, but nothing can be seen here.

Mounted on board with description. 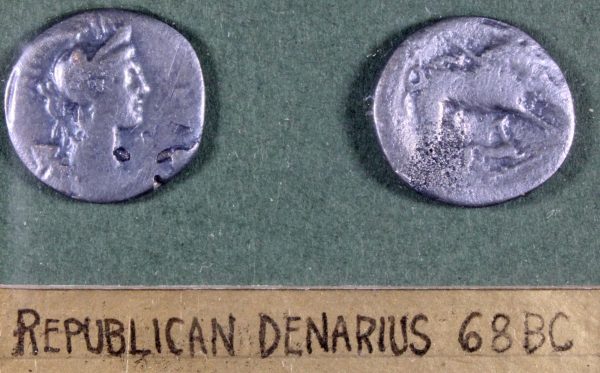 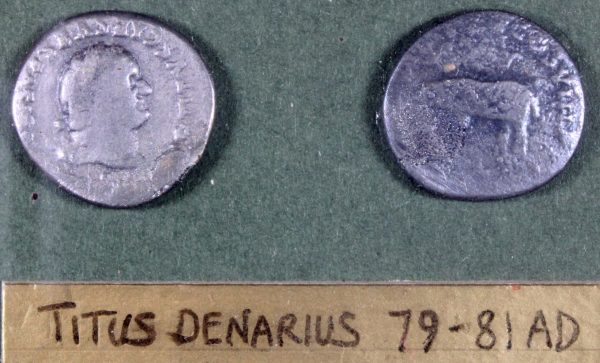