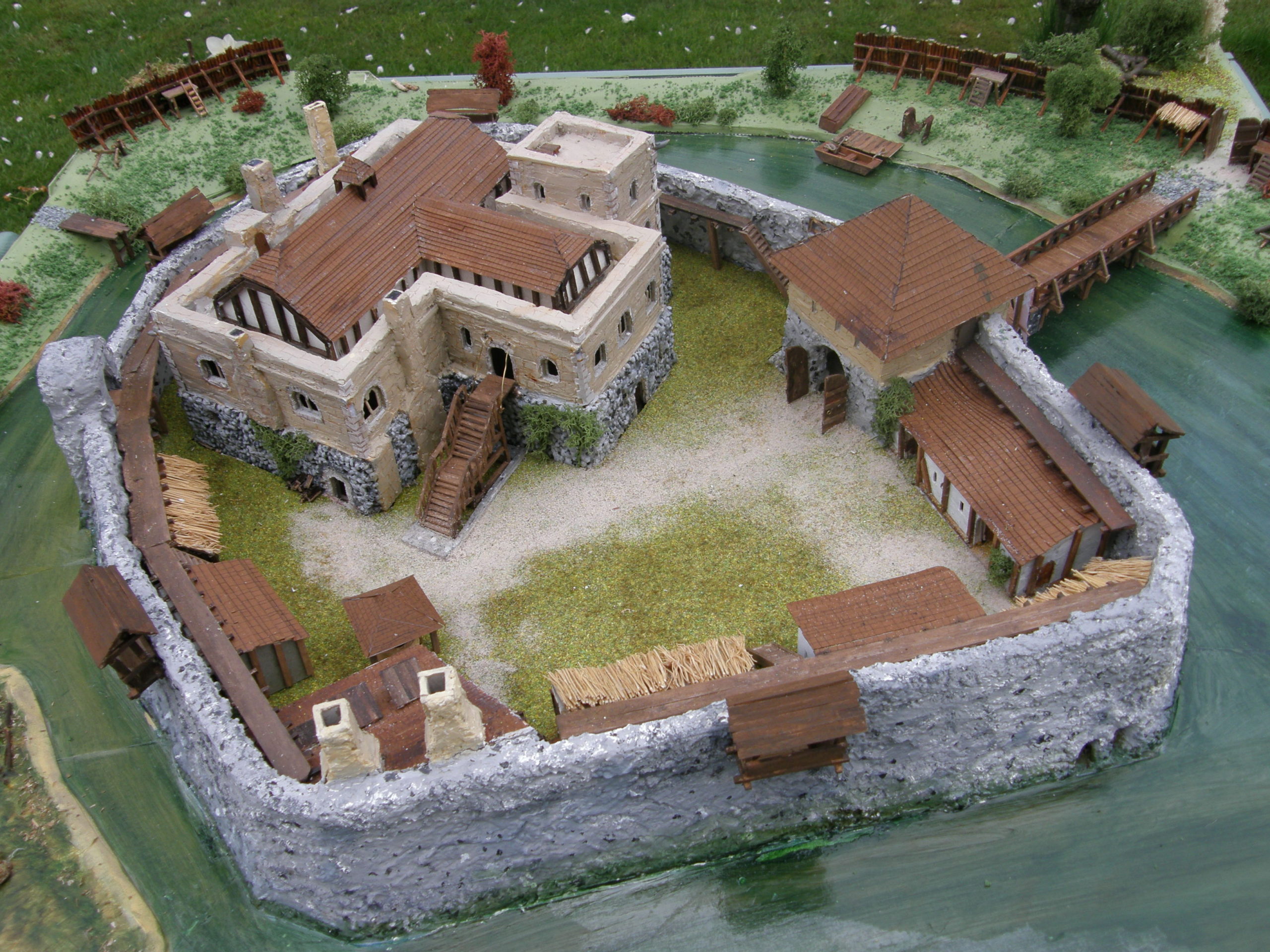 Scale model of Eynsford Castle with figures as it may have appeared in 1170.  Download image PDF.

It was home to the archbishop’s knight, William de Eynsford. His great grandfather, Ralf, son of Uspeck, had first built a moated enclosure on this spot eighty years previously. It had been gifted to him by Archbishop Lanfranc.
This was a strategic location for both the king and his archbishop, as it prevented further land acquisition by the king’s ambitious brother-in-law, Bishop Odo. Odo’s own knight, Wadard, held his fortified home just a few miles away, on the river at Farningham.
By 1110, the curtain wall of flint rubble had reached a height of 30ft above the moat. The main entrance at that time was by bridge to the east. This protected mound with its watch-tower, was little more than a place of retreat in an emergency for de Eynsford, his soldiers and retainers.
It was William’s father who had turned it into a home for the family in the 1140s. He built the big central hall building and probably the gatehouse. The first floor consisted of two areas, the main hall with its central open fireplace to the right, and the private ‘solar’ or family room, to the left. It was termed a ‘first-floor hall’.
Below these rooms, on the ground floor, were two great undercrofts. These spaces were partially sunken to enable broad, 16ft high pillars to support the rooms above. The area on the left, with its own fireplace, was the living quarters to the castle’s steward. The undercroft on the right was, we believe, used primarily for storage. Outside, just a single wooden staircase permitted entrance to the first floor areas. The old entrance bridge, previously sited directly behind the new building, was now probably destroyed. The impressive drawbridge and gatehouse would take its place.
The hall was built from flint rubble and greensand blocks. In about 1165, William de Eynsford added the forebuilding and the tower to the front of his home. It had now become a statement of power and the centre of administration and law for the district.
It was William’s grandson, another William de Eynsford, who, in 1216, joined with the three rebel knights of Kent to defend Rochester Castle against King John in order to defend the rights of the Magna Carta. Captured by King John after the siege and fall of Rochester, William was held for an extortionate ransom and his castle confiscated by the king until John’s death later that year.
In 1261, the de Eynsford line finally died out. The castle was seized, sold, and exchanged by a series of courtiers, distant family members and later owners. In 1310, a distant relative of de Eynsford, aggrieved at that time by the purchase of the castle by a land-acquisitive judge, William Inge, took the law into his own hands and ransacked the whole estate and so began its steady slide into decline and ruin.
You can visit and explore the castle ruins, free of charge, on most days. Its’ entrance may be found as a discreet turning off the centre of Eynsford’s High Street, signposted, Eynsford Village Hall and castle . Well worth the visit. Wander its ruins for yourself but take your imagination along.
(Rod Shelton)